Fellow Cameroonians;
My dear compatriots;
Here we are at the end of 2019, a year that saw a series of serious political, security, humanitarian and economic events.
In my end-of-year 2018 message, I painted a grim picture of the general situation in our country and I sincerely hoped that it would improve in 2019.
Unfortunately, the situation has worsened. Indeed, at the end of 2019, Cameroon is a disaster-stricken State due to the obsession of Mr Paul BIYA for power. Never has a man sacrificed, for his ego, the life of his compatriots, all social categories combined.
The dramatic armed conflict that the regime has imposed on compatriots in the North-West and South-West regions persists and, despite the evidence that no one can win this war by arms, the government refuses to hold a sincere dialogue to stop it.
The results of this fratricidal war are terrible:
– in humanitarian terms, between 3,000 and 12,000 dead, according to sources, among the civilian population, hundreds of members of the defence and security forces are massacred on the battlefronts, more than 50,000 refugees in Nigeria, hundreds of thousands of internally displaced persons, a widespread practice of torture and barbaric acts, mass arrests and detentions;
– on the economic and social front, the discontinuance of the activities of many companies established in these regions; thousands of jobs destroyed in a country plagued by high unemployment and a chronic lack of jobs, especially among young people; and the two regions declared « economically depressed areas » by a decree of the Prime Minister, since September 2nd, 2019.
Although from experience Mr Biya has little credibility before international and national opinion on his ability to keep his commitments, we gave him the benefit of the doubt when he announced, on September 2nd, 2019, the organisation of a Major National Dialogue; we believed he was driven by a patriotic awakening in the face of the humanitarian drama and threats to territorial integrity linked to the NWSW situation.
It is with this in mind that the CRM, during the consultations preceding the Major National Dialogue, proposed to the Prime Minister an inclusive and methodical approach aimed at implementing a definitive solution to the crisis in the NWSW. Among other things, this included:
– Release of all those who are detained in the context of the Anglophone crisis;

– Ceasefire negotiated with armed groups;
– Withdrawal of the 3rd category forces from the NWSW;
– Establishment of a Disarmament, Demobilisation, Reintegration Committee (DDRC);
– Emergency humanitarian and financial assistance for the return of displaced persons and refugees and their reintegration;
– Establishment of a Truth, Justice and Reconciliation Commission;
– Launch of the BROAD INCLUSIVE NATIONAL DIALOGUE (BIND), with the support of the international community.
The BROAD INCLUSIVE NATIONAL DIALOGUE (BIND) that the situation of the country commands must deal with other issues, including particularly the reform of the electoral system, the reform of our institutions, the guarantee of fundamental human rights and public freedoms and the guarantee of the independence of Justice.
For such a Dialogue to be really useful, effective and successful, a preparatory working group must firstly be assigned the task to resolve certain practical and critical issues, within the framework of the draft texts to be submitted to the approval of the participants at its opening. These include:
– the draft agenda;
– the dates and the calendar of the event;
– the organisation of the Dialogue Bureau;
– the organisation of debates and decision-making procedures;
– the acceptance of the binding nature of the Dialogue’s resolutions;
– the timeline for implementing resolutions;
– the implementation monitoring mechanism.
Regarding the agenda of the Grand National Dialogue (GND), the CRM having noted that it would go beyond the crisis in the NWSW and reach to other questions of national importance, considered that this had to include a number of essential requirements for its success:
– the debates should be conducted by an independent person, enjoying proven experience in conflict resolution and consensually approved by the participants;
– The involvement of the international community and certain powers, including in particular the United Nations, the AU, the EU, the United States, France, Great Britain, Germany, Canada, is indispensable, with regards to the high mistrustful relations between the parties concerned, and in light of the experience of these organisations and powers in resolving conflicts and the credibility they would bring to this process.
– In order to ensure the transparency of the proceedings, the CRM recommended greater media coverage of the GND and the full dissemination of its debates.
Alas! that was without taking into account the nature of the current regime. As always, it used the Grand National Dialogue as a trick to gain time in the face of international pressure, instead of making it a sincere step aimed at finding consensual and lasting solutions to the challenges facing our country, particularly in the NWSW. It therefore ignored the CRM’s proposals, as well as the similar ones from civil society and the international community.
It may be recalled that at the official opening ceremony of this Grand National Dialogue, on September 30th, 2019, the Sultan of the Bamuns delivered a courageous and well-inspired speech, which were in line with the reforms proposed by the CRM and all national and international organisations concerned with the rebuilding of a lasting peace in our country. He also posed the central question of change at the highest level of government. His proposals were badly received by the Prime Minister who, some time before, had himself been publicly disapproved by the Minister of Territorial Administration on the orientation to be given to the dialogue.
The Grand National Dialogue, which was only a monologue and a headlong rush in view of the gravity of the situation in the North-West and the South-West as well as the political climate which prevails in the country, concluded with unimportant resolutions, moreover not binding on the authorities and without any timeline for implementation. These recommendations gave rise to what is now called the Decentralisation Law, as if no such law existed. The great find of the GND is to have discovered, more than 23 years later, that the Constitution of April 18th, 1996 provides in its section 62, para.2, the possibility of a special statute for certain regions of the country.
In view of the heavy atmosphere of mistrust of the NWSW populations vis-à-vis the government and the persistence of the armed conflict which has caused significant human, economic and social damage, this Decentralisation Law undoubtedly comes too late and offers very little for the resolution of the crisis. Today the security and political situation of the country calls for a sincere discussion between Cameroonians on the form of our State; and for it to bear a hope of peace, such a discussion must not exclude the issue of federalism. To make this statement is not to praise secession or separatism. Because, it should be once more emphasised that federalism is not synonymous with separatism or secession. The CRM’s position on separatism is known and constant: secession is not an option! However, we are convinced that we must dialogue with all Cameroonians without exception, including those who defend, for the moment, the secession option, the federalists, the centralists and the diaspora. It is the only way available to the current regime to avoid the risk of implosion of the country. It’s a question of pragmatism: we normally do not try to make peace with those who side with us, but with those with whom we disagree!
Under the new Decentralisation Law, section 246, according to which the future « city mayors » placed at the head of urban communities must henceforth be « native » personalities, adds up to that which states that the heads of regional executives must also be « natives ». Such provisions are a negation of citizenship and democracy. They establish in our country a political exclusion incompatible with the idea of Republic and democratic principles.

Fellow Cameroonians, dear Compatriots!
At this greatly dangerous moment for Cameroun, some weak minds, seized with panic, spit the venom of hatred. They are victims of their fears. It is at this very moment that our country has the greatest need for women and men capable of elevation of spirit, deep patriotism, empathy for their compatriots to cross the delicate course without sinking into the dementia of security and political chaos. Therefore, faithful to my constant approach of national gathering, I appeal to the best of each inner self to escape national self-destruction, to this tribalistic inclination which is becoming stronger every day, and to work resolutely to build together the new Republic for which our people have been calling for so long. Such a mission cuts across political parties, ethnic cleavages, religious affiliations and beliefs of all kinds. It is to a national awakening that the dramatic situation of our country is urging all its children. We must have the courage to note that the current system has exhausted its possibilities and that Cameroon can expect nothing from it, to agree that it is becoming urgent to resolve the crises that threaten its integrity and cohesion, that it is time to find a new leadership for the country in order to give a chance to the numerous Cameroonian youth, talented, but desperate and futureless under the current conditions.
I know that there are enough human talents and resources in our country to guarantee her a bright future.
Let’s resist! A bright future awaits us! I wish you a happy new year 2020.
Long live peaceful resistance!
Long live Cameroon! 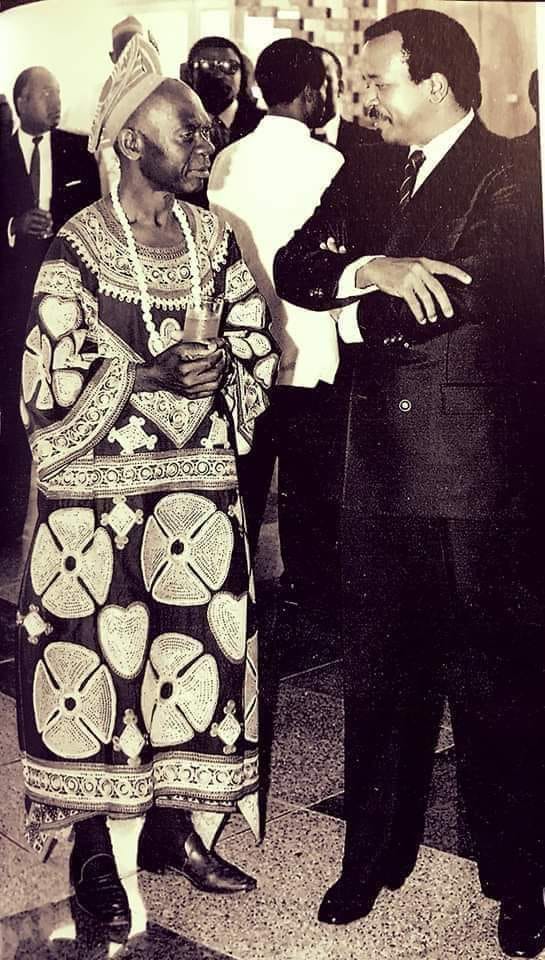